As a 30+ year veteran street-cop, Bob Houzenga brings a real world perspective to his teaching.  Combined with his competitive career that spans decades and has earned him six national titles and over 300 state and local titles, he is uniquely qualified as a firearms instructor.  Bob has served as a staff instructor for Massad Ayoob’s Lethal Force Institute since the early `80s.  He is also the firearms instructor for his department and expert in Police Training for surrounding county and municipal departments. 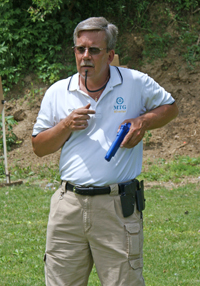 In addition to his firearms credits Bob is a certified instructor in Kubotan/persuader, and Weapon Retention and Retrieval. He has trained in knife/counter-knife techniques as well.  His long list of training includes: Gunsite, Chapman Academy, Massad Ayoob, Jim Cirillo, John Farnam, and Joe Truncale.  In 1996 this cumulative experience came together when asked by several LFI graduates to provide a two-day advanced shooting course.  Together with fellow firearms instructor Andy Kemp, Bob created a program of fast paced drills for the advanced shooter, aptly called “Shoot `til Ya Puke”.  This was so successful that it soon became part of Massad Ayoob’s Lethal Force Institute program under the banner of LFI-Advanced Handgun Skills.  It is, to date, the only course offering by LFI that is not designed and/or taught by Massad Ayoob.  That Massad would put his stamp of approval on the course and welcome it into his curriculum speaks volumes to Bob’s skill in building a training program and is an honor any firearms instructor can be proud of.
Bob Houzenga is currently Chief of Police in Camanche, Iowa. He is a Master class IPSC and IDPA competitor.  When he is not teaching or running the police department Bob often provides expert witness testimony on behalf of the defense in justifiable shooting cases.  He is a published author and has appeared in approximately two-dozen publications. Midwest Training Group is proud to have him as co-Director.

Andy Kemp brings 50+ years of shooting experience with him. He has been a staff firearms instructor for Massad Ayoob’s Lethal Force Institute since the mid-90s and was also a staff instructor for John Farnam’s Defense Training International, giving him the rare honor of having instructor credentials with two of the Big Four schools. 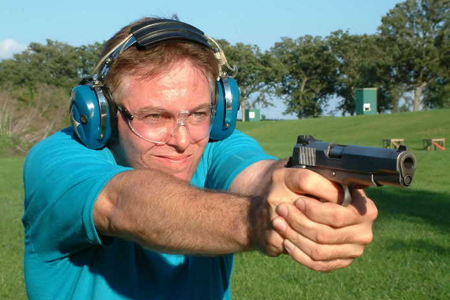 In addition to firearms training, Andy is instructor-certified in Weapon Retention & Disarming and Kubotan/Persuader. Knife/Counter-Knife training and unarmed self-defense tactics supplement Andy’s regular firearms training, adding a more universal dimension to his instructing style. Over the years Andy has trained and taught with many of the most prestigious and nationally renowned firearms instructors including Massad Ayoob, Chuck Taylor, Bank Miller, the Chapman Academy, John Farnam, Joe Truncale, and Jim Cirillo. This diversity allows Andy to provide students with the full spectrum of techniques and philosophies. Andy was also co-creator/instructor for LFI-Advanced Handgun Skills, a high-intensity handgun skill development course added to the Lethal Force Institute curriculum and which now carries the MTG banner.
A “Master”-ranked IDPA and Glock Shooting Sports competitor, Andy holds several state and regional combat shooting titles, and together with his daughter, Samantha Kemp, won the National Parent/Child Team Championship at the final round of the Jr. Nationals.  Andy has trained hundreds of Municipal, County, State, and Federal, law enforcement officers, LE firearms instructors, civilian firearms instructors, Security personnel, and Military firearms instructors, including AF SERE Operators.  He has had articles published in Combat Handguns and Handguns Magazine and has made TV appearances on CNN and Headline News as a weapons expert. His name and photo have appeared numerous times in many of the finer gun publications.

Massad Ayoob is widely considered to be today’s leading authority on the judicious use of lethal force by private citizens in defense of themselves and others. He is the author of the authoritative text on the topic, the best-selling “In the Gravest Extreme: the Role of the Firearm in Personal Protection,” as well as “The Gun Digest Book of Combat Handgunnery” (5th and 6th editions) and “The Gun Digest Book of Concealed Carry.” 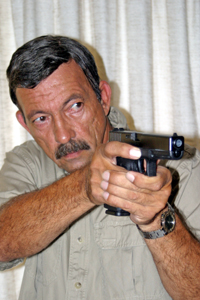 Ayoob has served nearly 36 years as a sworn police officer, at ranks from patrolman through captain…served for 19 years as chair of the firearms committee for American Society of Law Enforcement Trainers… and taught at regional, national, and international seminars of the International Association of Law Enforcement Firearms Instructors.  He has been on the advisory boards of the Armed Citizens Legal Defense Network and the International Law Enforcement Educators and Trainers Association since the inception of each. Mas has been on the board of trustees for the Second Amendment Foundation for decades.

Massad has been handgun editor of GUNS magazine and law enforcement editor of AMERICAN HANDGUNNER since the late 1970s, and for many years has written the self-defense and the law column for COMBAT HANDGUNS magazine. He has served as an expert witness for the courts in self-defense shooting and weapons cases since 1979. Mas served for two years as co-vice chair of the forensic evidence committee of the National Association of Criminal Defense Lawyers, and in 1998 was voted Outstanding American Handgunner of the Year.  He developed the StressFire™ shooting system, later incorporated into the US Army’s pistolcraft doctrine, and has won many state and regional championships in IDPA, PPC, and other combat handgun shooting disciplines. Mas founded the Lethal Force Institute in 1981, and served as its director until 2009, at which time he founded the Massad Ayoob Group (MAG).

A veteran at Police Training, John Farnam is considered to be one of the top firearms instructors in the nation.  As president of Defense Training International (DTI) he has personally trained thousands of federal, state and local law enforcement personnel as well as civilians, in the tactical use of handgun, rifle, and shotgun.  As a military veteran who has seen action, John knows what works.  His experience in law enforcement enables John to differentiate between the training needs and responsibilities of a civil society as opposed to a military operation. 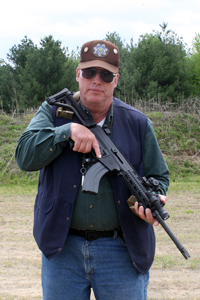 John has written and appeared in numerous articles and his classes have been the subject of several gun writers.  In addition to the firearms training videos John has produced, he has written some of the best texts on shooting techniques including The Farnam Method of Defensive Handgunning, The Farnam Method of Defensive Shotgun and Rifle Shooting, and The Street Smart Gun Book.

John is one of those rare firearms instructors who continue to train themselves, always seeking new techniques and skill.  He is a strong competitor each year at the National Tactical Invitational, a match designed to push shooters to the extreme and test every facet of firearms skill and tactics.  John brings the lessons learned there and elsewhere to his classes.  Each year John travels the country teaching the latest concepts in defensive tactics and marksmanship. 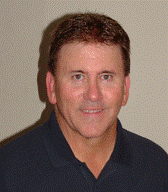 Bank Is a graduate of Antioch Law School, and American University, and has 28years of Federal and State Law Enforcement experience, mostly with the Drug Enforcement Administration. Bank was the Chief Firearms Instructor for DEA and after retirement founded the Renowned Sig Arms Academy where he served as Director.

Bank helped Action target Inc. start a training academy in 2004 and joined forces with international training out of San Antonio. Bank served in the Army and was in Vietnam with the First Calvary Division. After coming off of active duty Bank stayed in the reserves and retired in 1994 as a CWO-3.  Bank continues to teach his practical street-proven firearms and tactics techniques to date.